‘Lost in our world. Found in another’

I have so much to say about this movie but I guess I should start with what or who is John Carter.

John Carter (Kitsch) is an American Civil War soldier who is transported to Mars. He first encounters the green skinned warlike nomads known as the Tharks and, due to his superhuman powers (Mars gravity and all that), quickly becomes embroiled in not only the political issues of the Tharks, but those of the red skinned, humanoid Martians as well.

The humanoids control Mars through a series of city states with Zodanga annihilating everything in it’s path. Helium is the last free state. Helium also has a beautiful and feisty Princess (Collins). A political marriage to save everyone has been arranged. Then she meets our handsome hero….yep you guessed it. The two fall in love and are now fighting for not just what they love and believe in but who they love and believe in.

This movie is based on the book Princess of Mars, the first in a series of 11 novels written by Edgar Rice Burroughs 100 years ago. They are also known as The Barsoom or John Carter of Mars series. A lot of what you have seen in these types of movies up until now has drawn, in some way, on this series of novels. Star Wars, Avatar, Babylon 5, Flash Gordon and even some Indiana Jones. I am sure the list is endless but Sci Fi is not my genre. When you watch John Carter, you will be able to pick the similarities immediately.

If you are aware of this movie’s existence, then you are probably aware of the negative attention it has garnered. I saw this movie over 2 weeks ago and have had to watch silently as people all over the internet trash it. They have laughed at Disney for spending $250 million on an obvious dud. They have said Disney has distanced itself from the movie before its release. They have criticised everything from the trailers to the posters to the casting of 2 unknowns as the leads. Oh and they have done all this without having seen the movie! These people are best ignored and sent back to their mother’s basements!!

Now, I will say that Disney has done itself NO favours whatsoever with the posters and trailers for John Carter. This I will concede. But I have found the best trailer which was made by serious fans of the books (www.thejohncarterfiles.com).

Please, if you are going to watch a trailer for this movie, make it this one. It just gives you a much better idea of what the movie looks like.

So what did I think? I LOVED it. I really, truly did. I wanted to see it because I had read so much about it over the last few years. Sci Fi may not be my thing but that doesn’t mean I don’t know what’s going on in the land of movie making.

This movie has all the blockbuster action we have come to expect from this genre. The CGI is spectacular. The Martian characters are fantastic. The stand out Martian is without a doubt Woola, a pet that adopts John Carter and is as ugly as he is adorable. An ugly slug like animal that will melt your heart. Trust me!

There is good vs evil. There is martian vs martian. There is human vs human. There is serious stuff. There is fun stuff. A stand out scene I just cannot resist mentioning…. 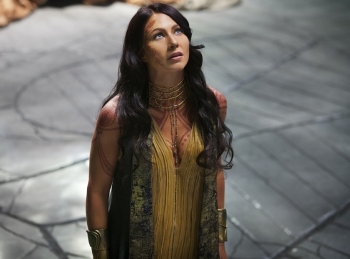 When Carter does arrive on Mars, his introduction to Tars Tarkas is absolutely hilarious. The mistake with his name becomes an ongoing gag throughout the movie and to great effect. Even our hero gives up, smiles and just shakes his head. Oh and yes, there is a very easy and believable reason why they all speak English.

Ignore the critics and go see this movie. I think you will enjoy it. I saw it in 3D and I usually think 3D is a waste of money (sorry studios) but for this movie, fork out the extra $5 and see it in 3D.