You are here: Home / REVIEWS / Albums / Somewhere Over The Rainbow – The Best of Israel “IZ” Kamakawiwo’Ole

Israel “IZ” Kamakawiwo’Ole is a ukulele playing Hawaiian folk singer who sadly passed away in 1997. He was only the 3rd Hawaiian to receive a State funeral and it was attended by approximately 10,000 people. All of which was quite sad information to discover as I was looking around to find out a little about the man behind the CD that landed on my desk this week.

The musical career of ‘IZ’ was quite prolific and in the time since his passing he has released as many solo albums as he did in his life, which seems a little unusual, though his talent is certainly worthy of them! 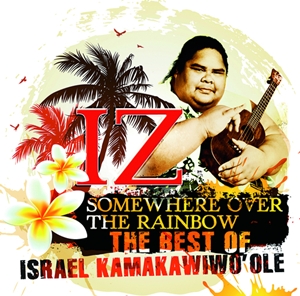 ‘IZ’ was quite acclaimed as a solo artist and had released 9 albums with a group prior to going solo. His simple, honest messages reach inside and touch you.

Somewhere Over The Rainbow contains a cover of Judy Garland’s 1939 ‘Over The Rainbow’ which has been a major hit for ‘IZ’. It has been featured in several hit movies, downloaded more than 2 million times and spent lots of time in different charts across the world. ‘Over The Rainbow’ is a song that has been covered countless times and a lot of them have been less than complimentary to the original… this version is definitely not one of them.

Also on this CD are covers of  Wind Beneath My Wings, What A Wonderful World and In This Life (which I can’t for the life of me place) and all of these covers do justice to the originals.

Not a musician I was familiar with before today but quite an interesting addition to my collection I must say.

All of the tracks contained on this CD are from the 4 studio albums released before his death in  1997.

Over the Rainbow was used in multiple movies and TV shows and it makes me wonder, do you take note of songs you hear within movies and search them out?

With movies Walking Out and Paradox being released on DVD and Digitial this month, we have … END_OF_DOCUMENT_TOKEN_TO_BE_REPLACED

With movies 2:22 and Slumber being released on DVD and Digitial this month, we have two … END_OF_DOCUMENT_TOKEN_TO_BE_REPLACED

This week at the movies is A Quiet Place, and it is getting positive reviews by critics … END_OF_DOCUMENT_TOKEN_TO_BE_REPLACED