You are here: Home / **VIEW ALL ENTERTAINMENT** / Single Review: The Sound – Venus Fire

The new project is charming and it has a universal appeal with lyrics and vocals that are sure to work their way into your head and your heart. But the film clip – yes, I went chasing down the Venus Fire website and the video clip on you tube.  The film clip is brilliant. ‘The Sound’ is a drink in a bar, and each of the drinks available there are a behaviour. Move, Dutch Courage, Smashed, Purge, Giggles, In Your Face… as you can imagine this film clip gets very busy, but in such an artistic and eye-catching manner. Guerilla Creative have breathed an impossible-to-look-away-from life into the timeless lyrics penned by Clare. 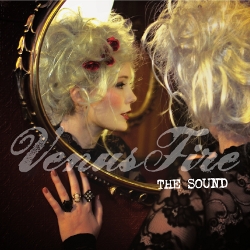 The Sound is a song that is going to touch everyone in a different place. It is very open to interpretation and able to be molded to match experiences from all of our lives.

If you love a song you can sing along to and get right into then this is the song for you. The vocals are both haunting and melodic with a hook that is sure to catch you. I have been listening to it on repeat for…. let’s just say a while… and to hear it go from the final chord back into the opening ones is  interesting. It’s like Clare starts low and deep then as the song progresses the pitch gets higher and higher but it’s done with such natural progression that it never really struck me until I started to register the end moving back into the beginning.

The Sound is the first single by Venus Fire and it was produced by Steve Schram who has worked with Little Birdy, and Tommy Spender who has worked with Kimbra. With the support of an Arts Victoria Career Building grant The Sound will be released as a single on the 23rd April.

There will be launch shows for ‘The Sound’, in Melbourne and Sydney in May/June of 2012, but don’t feel left out if you aren’t in one of those cities because there will be a national tour later in the year.

Venus Fire is sure to set the stage ablaze with the live launch shows and this will be a star to watch rise. The vision, the lyrics, the vocals – all combine for a seamless musical experience that will touch you. I love it. I can’t wait to hear what comes next!

Out on February 13 at the cinemas, A Guide to Second Date Sex is a British … END_OF_DOCUMENT_TOKEN_TO_BE_REPLACED

With movies Walking Out and Paradox being released on DVD and Digitial this month, we have … END_OF_DOCUMENT_TOKEN_TO_BE_REPLACED

With movies 2:22 and Slumber being released on DVD and Digitial this month, we have two … END_OF_DOCUMENT_TOKEN_TO_BE_REPLACED