Channel 7 have one of the most highly anticipated shows of 2014 in their line-up this year and the air date is fast approaching. I have tried to get an actual air date but all I have been able to discover is that it will air After The Tennis which is coming up soon.

INXS: Never Tear Us Apart is a two part mini-series detailing the rise to fame of Aussie rock icons INXS from a pub band to International stardom. The show will include the relationships of frontman Michael Hutchence with both Kylie Minogue and Paula Yates.

INXS manager Chris Murphy is a co-executive producer on the show and all of the remaining members of INXS have signed off on the dramatic portrayal of their rise to fame and right through to the tragic death of Hutchence in 1997. The series will feature some original recordings and some of the original clothes worn by the band.

Tim Farriss, lead guitarist of INXS, is one of the producers on the show. He often flew to Melbourne to oversee production and advise on filming, actors and script. He has said that parts of the show were difficult for him to watch. 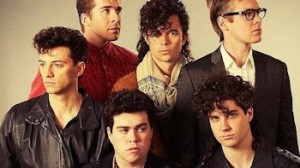 From the moment I saw the first trailer for this show I knew I wanted to watch it. It has been billed as an “extraordinary, uncensored story of the most successful band of the 80s,” and I was a little young for most of their career. They were already big by the time I remember hearing of them and they weren’t really my type of music but I do remember the very public relationship of Michael and Kylie Minogue, and who can forget the news of his tragic passing. I am really looking forward to watching this behind the scenes look at the band and acquainting myself with their early career and rise to stardom.

The cast of INXS: Never Tear Us Apart is made up of local actors with Hutchence being played by Luke Arnold, formerly of Winners & Losers. Arnold bears more than a passing resemblance to Michael Hutchence, something he has been told in the past, but it was going to take more than a physical resemblance to pull off this part. Hutchence had such presence and charisma in the way he moved, talked, sang and the way he was that Luke Arnold knew he would have to work hard to capture that essence. I, for one, can’t wait to see how he did.

Keep an eye on Channel 7 for air dates because I think this is going to prove to be must watch Australian programming – for the music, the excesses and the inside look at a band torn down in their prime by tragedy.