Grace Barbé has been awarded ‘Best World Act’ an amazing six years running in her current home state of WA. She has a natural gift for rhythm and melody, she plays guitar and bass as well as singing in three languages; English, Kreol and French. We were able to find out a little more about her and her career in this interview.

Hi Grace and welcome to Beauty and Lace, thanks for talking to us.
What made you want to be a musician?

Thank you. Listening to Bob Marley’s Legend album and trying to copy the bass line on the guitar! I knew I wanted to play bass. I have always been singing from an early age. I used to harmonise my mum singing hymns.

Can you tell us what you remember of your first ever gig?

Yes, I played bass for the Seychelles community band in Perth. With no experience, I played by ear. I was playing 3 sets at that time and gradually I started singing some songs and did backing vocals as well.

How would you describe your sound?

Can you tell us a little about your first album ‘Kreol Daughter’?

The album was written and arranged by myself and music collaborator Jamie Searle. It included songs that were written years before it was released. Kreol Daughter reflects the music journey I was going through then, so there are a few reggae tracks as well as some pop tracks sung in English and Kreol. I’m proud of it being the first album, we still meet people who talk about how a certain track on the album is still their favourite and they’re still listening to it. It’s a great feeling….

What would you say is your career highlight to date?

Playing at Womadelaide and Bluesfest. Getting to meet some amazing musicians such as Peter Green, Tinawiren, Tony Allen, Susan Tideshi and heaps more. Touring Cocos Islands was also a highlight. 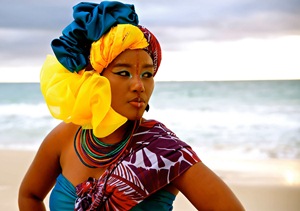 You are currently on tour, what can audiences expect from a live show?

Lots of coconut shaking!!! Guaranteed dancing…..you’re taken on a journey to the Indian Ocean Islands while also experiencing elements of rock and pop in the music.

Who has influenced your music career and love of music?

When you have downtime and listen to music, what do you love to listen to?

I personally love to listen to chill out meditation music or jazz. I try to listen to music that calms the mind when I’m not performing.

What’s next for Grace Barbe?

Releasing a mix from the Welele album mixed by one of our favourite international producer and musician. Finishing off studio recordings to be released later on in the year. More touring and more coconut shaking!!